My father-in-law was visiting last week. He asked if we could head over to Moe’s for dinner so that I didn’t have to cook. I’m always down for someone else to cook.

When we sat down to eat, I saw one of the managers and called him over.

“Everything is totally fine,” I started. No manager enjoys being called over by a customer who just sat down to eat, “But I was here at the Grand Opening and I never received my free burritos,”

He seemed relieved, “That’s an easy fix,” he said as he disappeared into the back kitchen.

When he came back, he had a pen and some paper, “Give me your name, phone number and the email address that you use for the app,” 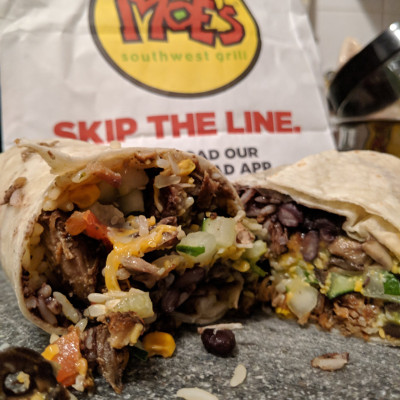 That was why I didn’t get my burritos initially. The app is hooked up to my facebook because that’s way easier to log in, but a junk email address that I check once every two months is attached to that. I didn’t give them the “right” email address on the day of the Grand Opening.

I re-wrote my correct email address, logged out of the app and then created a new account with my actual email address.

I am kicking myself for not swinging into Moe’s at some point this summer, but I didn’t want to be like, “Where’s my free shit, bro? You said that I’d get free burritos and I got zilch,” like a privileged jerk. It’s another one of those times where, if I had asserted myself politely and explained what I was owed, I would have been able to enjoy it all summer long.

Maybe it’s better that I waited though.

Now I’ll have free burritos through NEXT summer.
I didn’t want to go too crazy with my very first of 52 free burritos. My go-to burrito was enough. At some point, I’m sure that I’m going to get tired of this combination and I’ll have to get a little crazy.

The above image is of my very first free burrito. It’s a Homewrecker (that means that they put guac on it automatically, even though they ask you if you want guac every time you order one) with pork, olives, cucumbers, cheese, cooked mushrooms, guac (obviously) and corn salsa.

As you can see, Alexander the Greatest Sleepy Pug Ever really had his eye on the massive amount of stuff that was rolled up tightly into that tortilla. He may be a bigger Moe’s fan than I am. Maybe.

One thought on “Burrito #1”